Microsoft recently unveiled a number of improvements to its Azure cloud platform, including a premium storage service and a streaming analytics service.

Some of the announcements are in the “general availability” stage, which means the products are ready for commercial use in production environments. However, some of Microsoft’s Azure releases depend on using the Azure Preview Portal, which is still at the test stage. 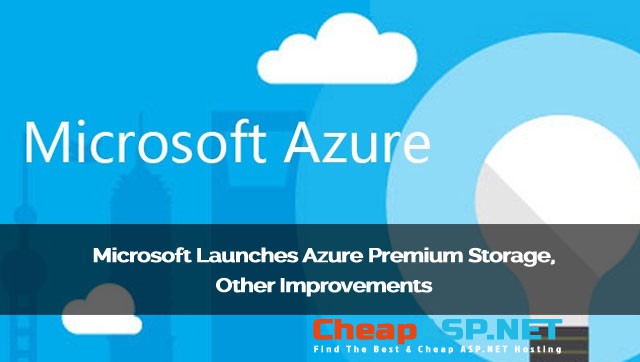 The new Azure Premium Storage product is one of those generally available products. Pricing for the service will take effect on June 1, 2015, Microsoft announced last week. The service is available in most Azure regions, except for U.S. Central at this time.

The Premium Storage service is for organizations needing high input/output operations per second (IOPS) performance. It supports 64,000 IOPs per virtual machine (VM), with up to 32TB of storage per VM. The service might be used to support “workloads like OLTP, Big Data, and Data Warehousing on platforms like SQL Server, MongoDB, Cassandra, and others,” according to Microsoft’s announcement.

Premium Storage gets managed using the Azure Preview Portal. The APIs can be accessed via REST and Service Management libraries, as well as Azure PowerShell. The service “supports only Azure Page blobs,” and Microsoft’s DS-Series of VMs have to be used, according to a Microsoft “Overview” document. The Premium Storage service doesn’t come with built-in analytics, so Microsoft advises using the Windows Performance Monitor for Windows VMs or IOSTAT for Linux VMs.

Also announced last week was the general availability of Azure Stream Analytics. Microsoft describes this service as a means of analyzing data coming from “Internet of things” types of devices, Web sites or applications. The service uses a “SQL-like language” to set up the analyses.

Microsoft describes its Azure Service Fabric as having “an architectural approach where complex applications are composed of small, independently versioned services.” It lets developers orchestrate and automate these “microservices” using tools such as Visual Studio or a command line interface.

Microsoft has been using its Azure Service Fabric for “more than five years” to run its various services. It’s been used for services such as “Skype for Business, Intune, Event Hubs, DocumentDB, Azure SQL Database” and the Cortana personal assistant coming to Windows 10, according to Microsoft’s announcement.

The Azure Service Fabric will be offered on top of the Azure App Service that Microsoft rolled out last month. The distinction between the two services wasn’t clarified in Microsoft’s announcement. Microsoft has described the Azure App Service as a trio of Azure services — namely Web Sites, Mobile Services and BizTalk Services. The Azure Service Fabric, in contrast, seems to be something more basic.